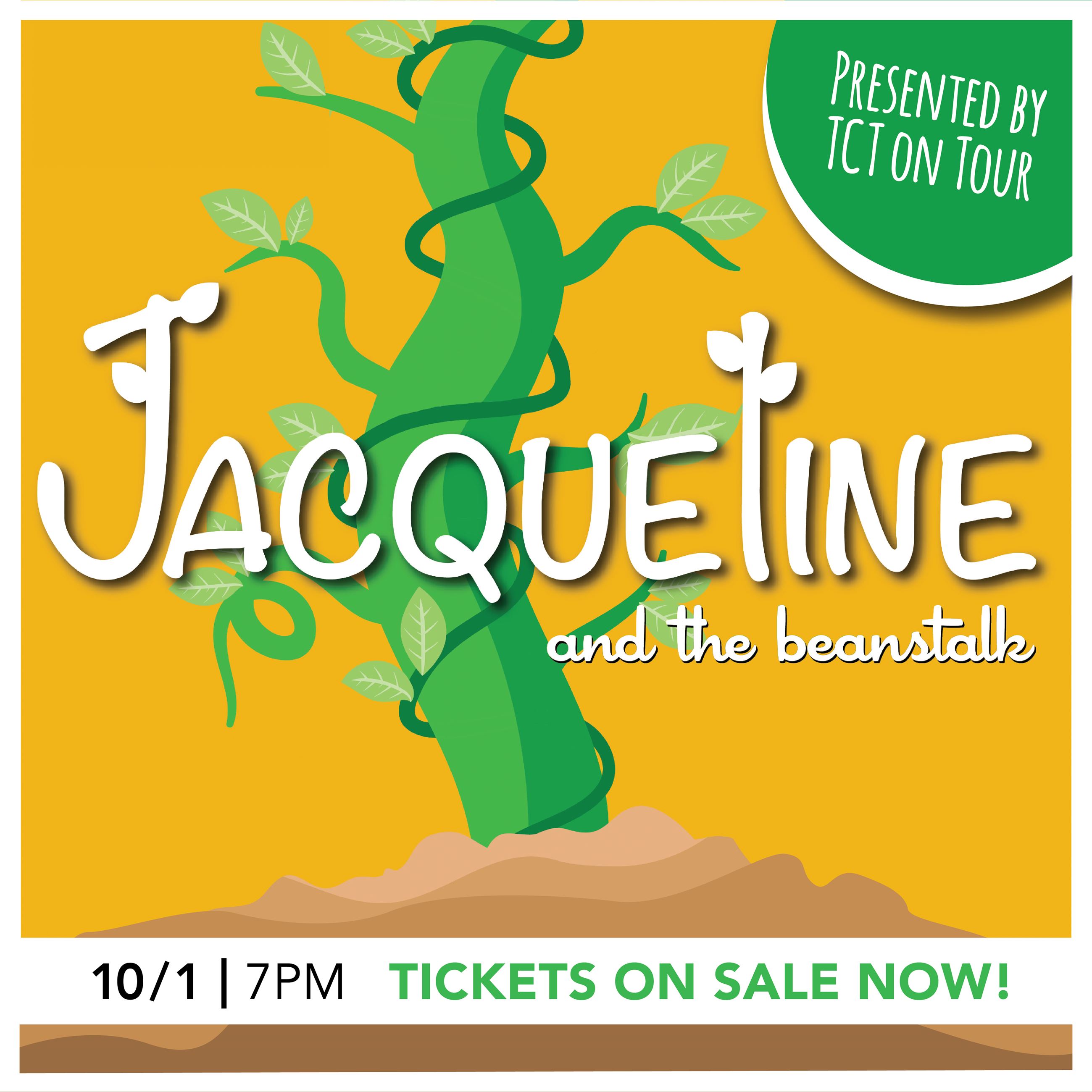 Jacqueline and the BeanstalkFriday, Oct. 1 at 7 pm

Presented by TCT On Tour: A Division of The Children’s Theatre of CincinnatiEnterAct Family Series: $17 Adult | $12 Child 12 & under*

Written by Deondra Kamau Means. Inspired by Jack and the Beanstalk and The Story of Jack Spriggins and the Enchanted Bean.

Once upon a time, Jacqueline had a brother named Jack. The entire village thought Jack was so smart, strong and witty, but when the family ran out of money it was Jacqueline who used her brain to get them out of trouble. Follow Jackie up the beanstalk as she seizes opportunity and proves her worth. 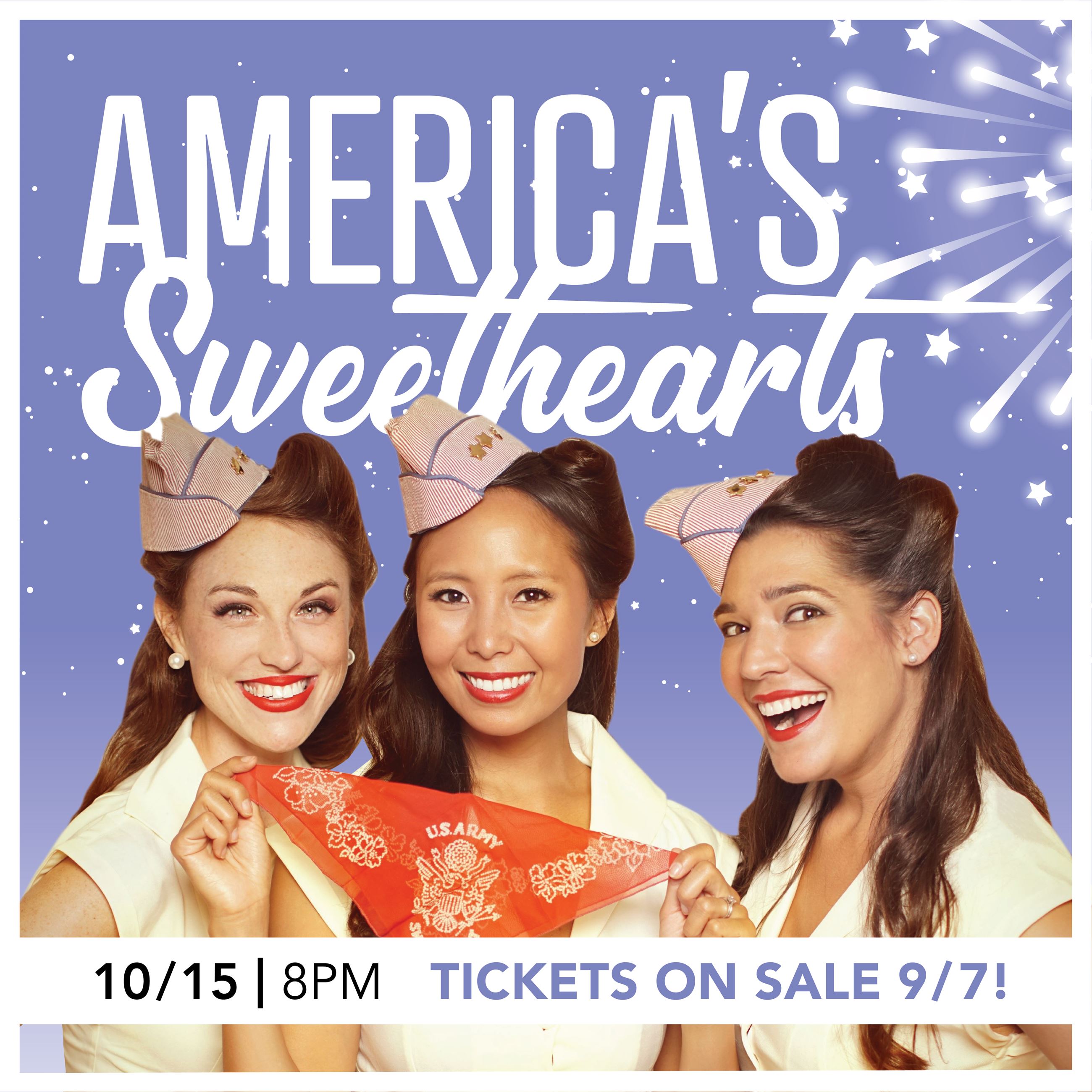 With selections from the Great American Songbook, classic Broadway, pop tunes from the 1950s, and jazz, America’s Sweethearts charm audiences of all ages while navigating their way through a variety of trios, duets, and solo features.

Featuring songs such as Bei Mir Bist du Schoen, Straighten Up and Fly Right, and Boogie Woogie Bugle Boy, it’s all with a slice of old-fashioned fun! 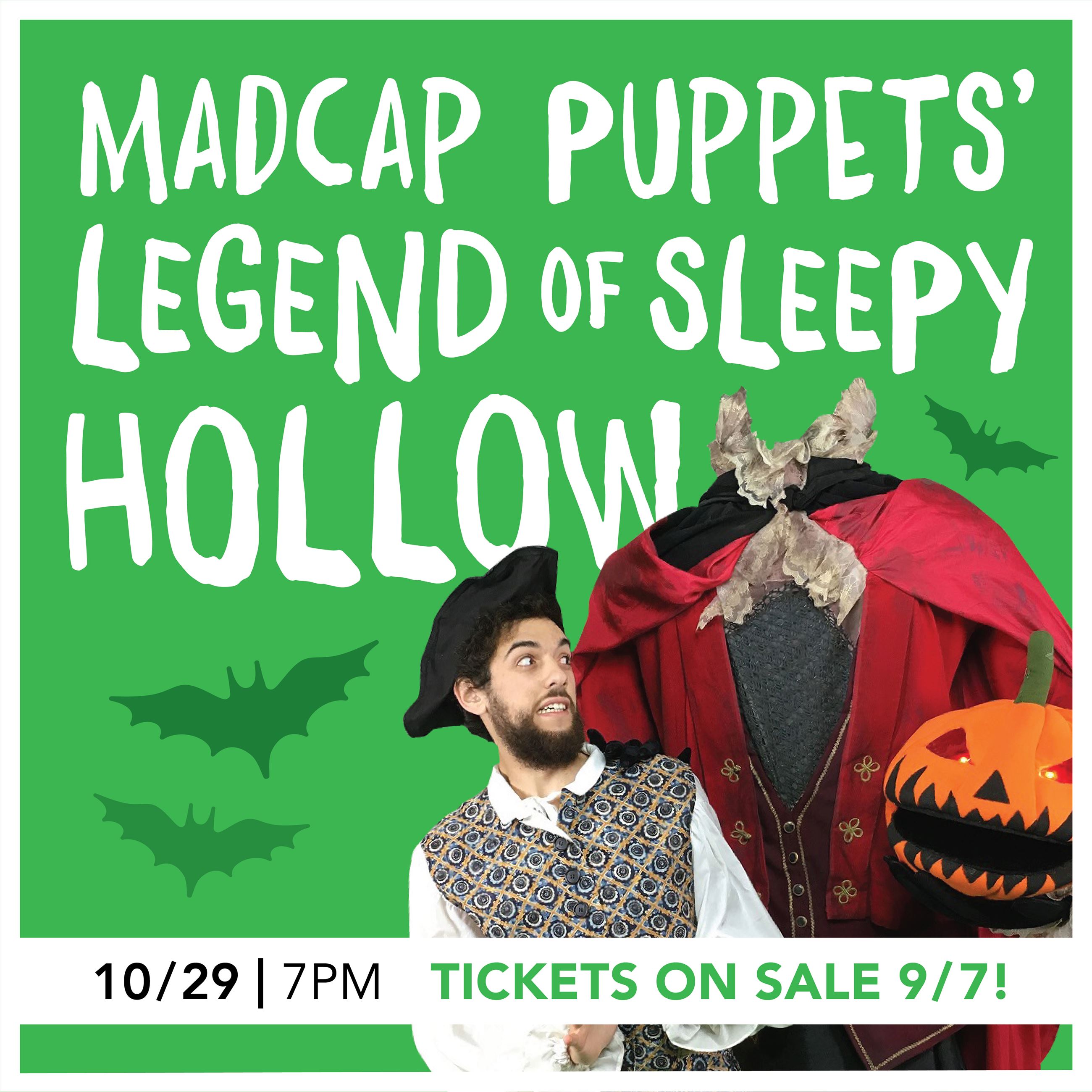 The lanky schoolmaster, Ichabod Crane, can’t decide what’s worse in the glen of Sleepy Hollow, or the headless horseman or the silliest of ghosts, the horseless headman. To complicate matters, Ichabod unwittingly vies with the local brute, Brom Bones, for the affections of Katrina Van Tassal. Ichabod endures a series of pranks and ghost stories, only to find himself on the ride of his life in this hilarious version of Washington Irving’s classic short story. Kids that come in costume will receive a special treat! 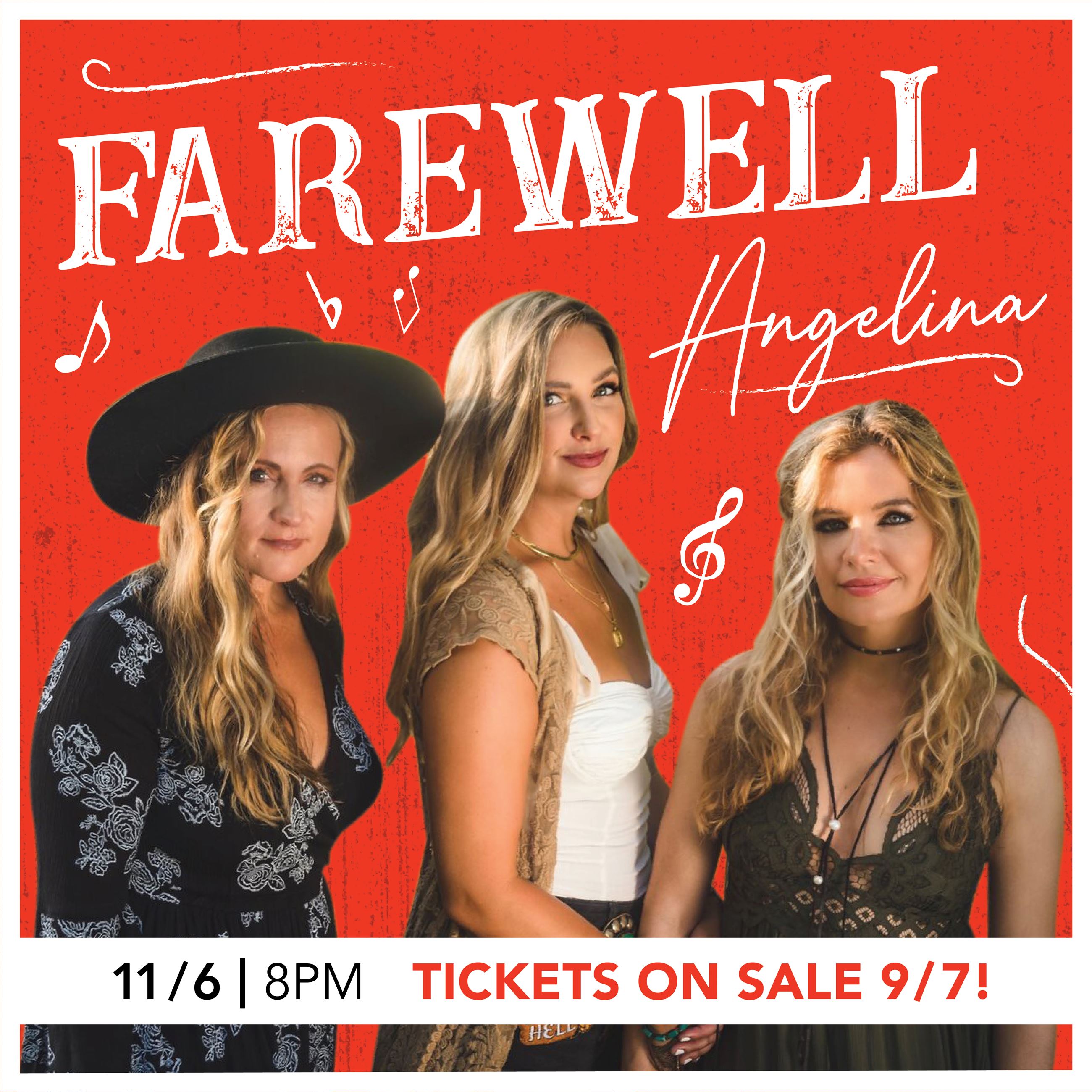 Named after a haunting Bob Dylan song, Farewell Angelina is an all-female country group with three powerhouse vocalists, dynamic songwriters, and accomplished multi-instrumentalists. Their stellar blend of heart-stopping harmonies over blazing double violins and guitars has earned soaring praise across the board. Roughstock calls them a “Superstar act... with killer songs.” Rolling Stone says, “Wickedly smart songwriting delivered with a healthy dash of sass... deft playing... into one sonic knockout punch.” 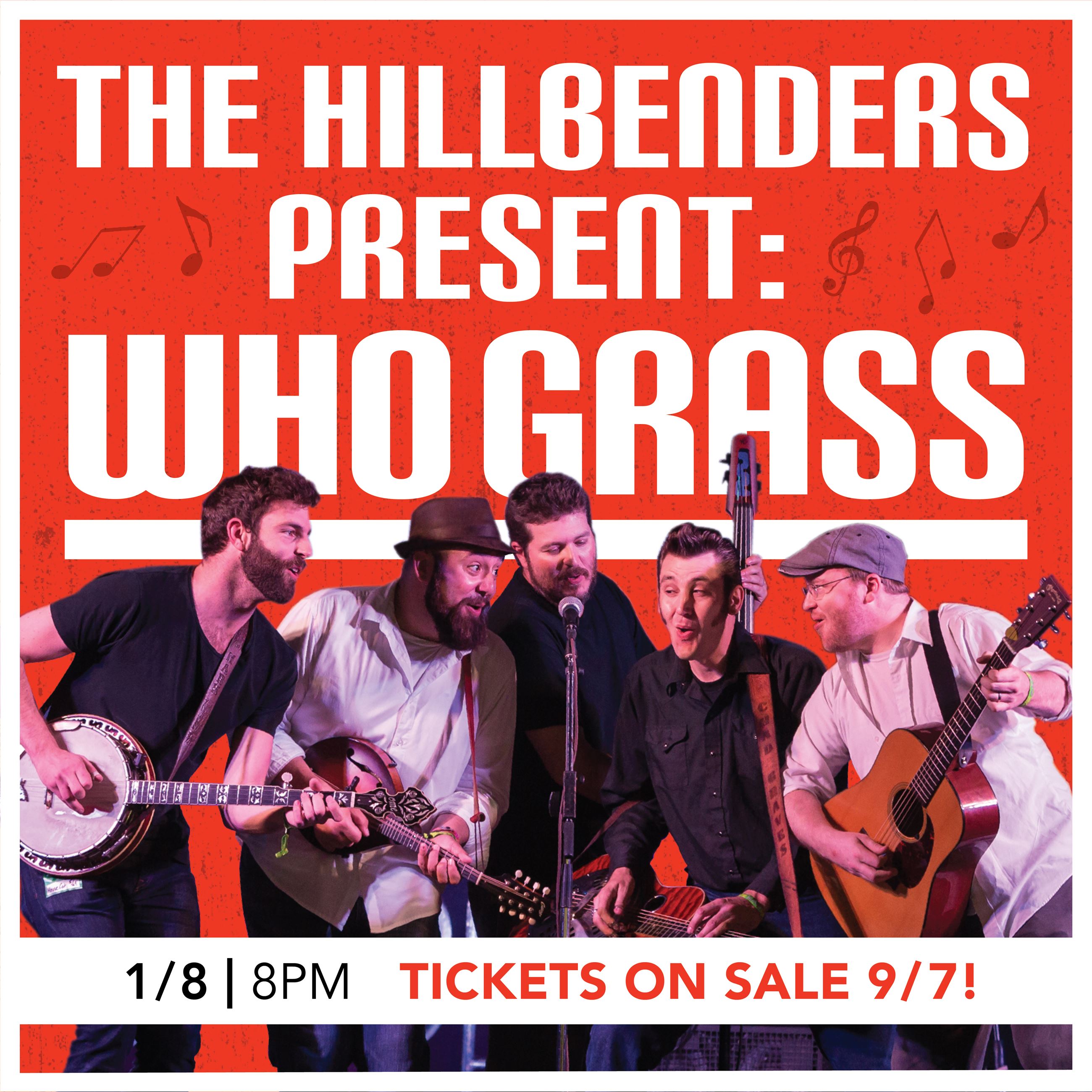 The HillBenders present Who GrassSaturday, Jan. 8 at 8 pm

A chronological journey of The Who’s legendary catalog through the wood and wire of bluegrass instrumentation. WhoGrass gives the audience a career spanning twist on one of Rock ‘n’ Roll’s greatest bands. From the early hits all the way through The Who’s discography and even a peek into Pete Townshend’s solo career, the rolling banjo, intense dobro percussion, and thunderous vocals will have even the biggest Who fan pumping their fist and singing along! 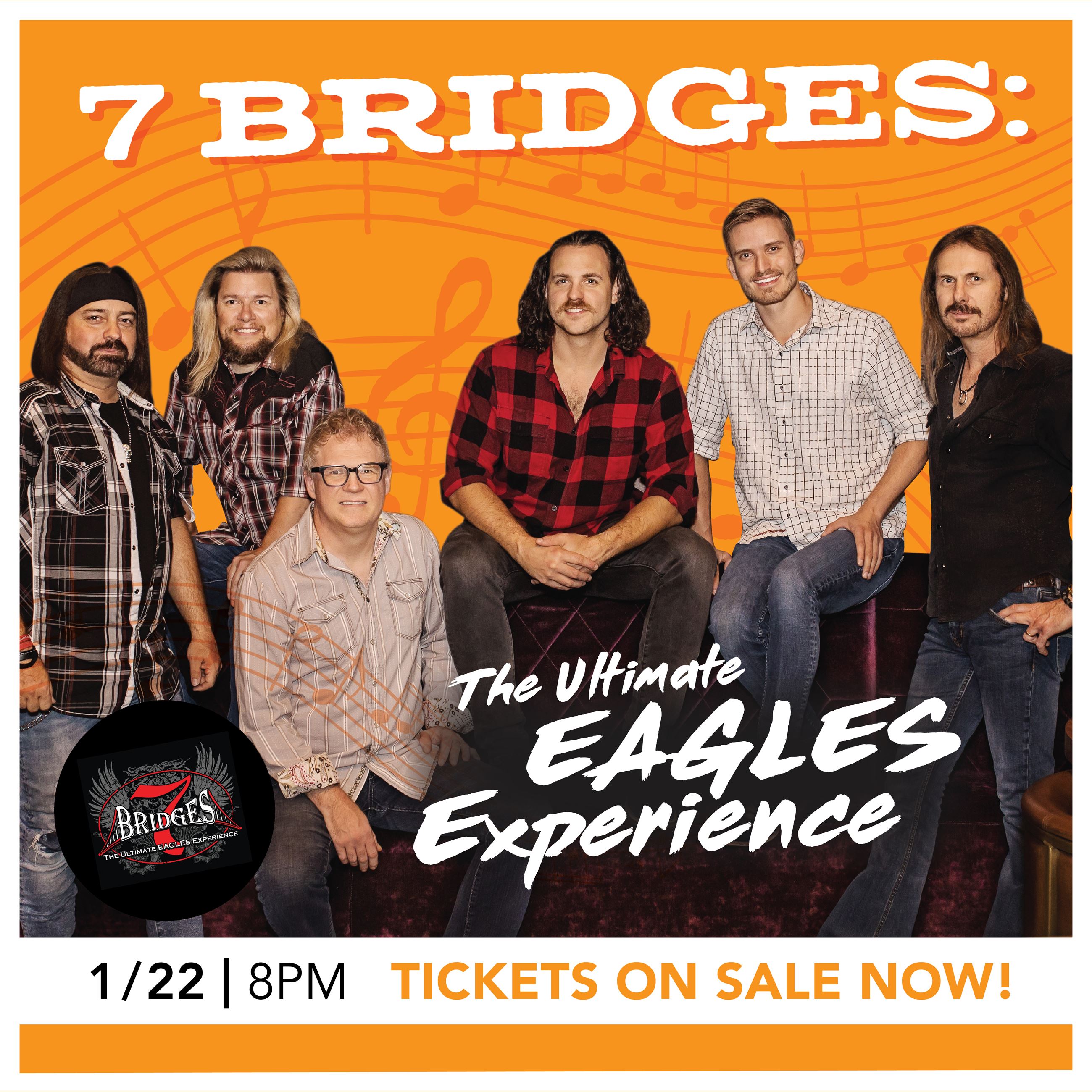 The world’s greatest eagles tribute band! 7 Bridges stunningly re-creates the experience of an Eagles concert! Every show features one brilliant hit single after another with some mighty Don Henley, Joe Walsh and Glenn Frey solo surprises sprinkled into the mix. The perfect blend of songs to capture all levels of Eagles devotees. 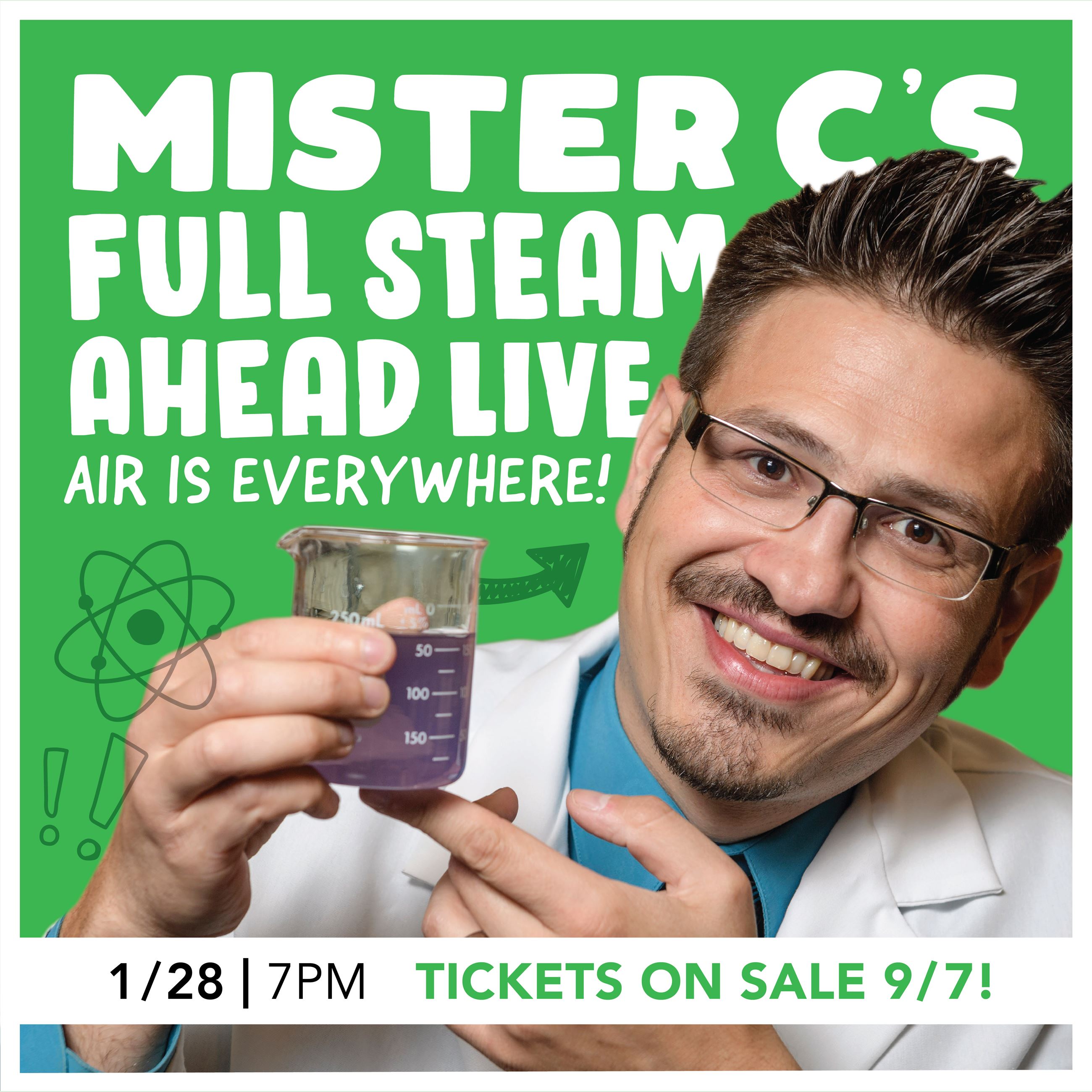 Are you ready for some hair-raising science, toe-tapping music, and mind-blowing media? Mister C is no stranger to finding exciting and engaging ways to explore STEAM (Science, Technology, Engineering, Art, and Math) in our everyday lives. Everyone will be singing, dancing, and learning to the tune of science as Mister C uses humor, media and the engineering design process to make the ordinary EXTRAordinary! 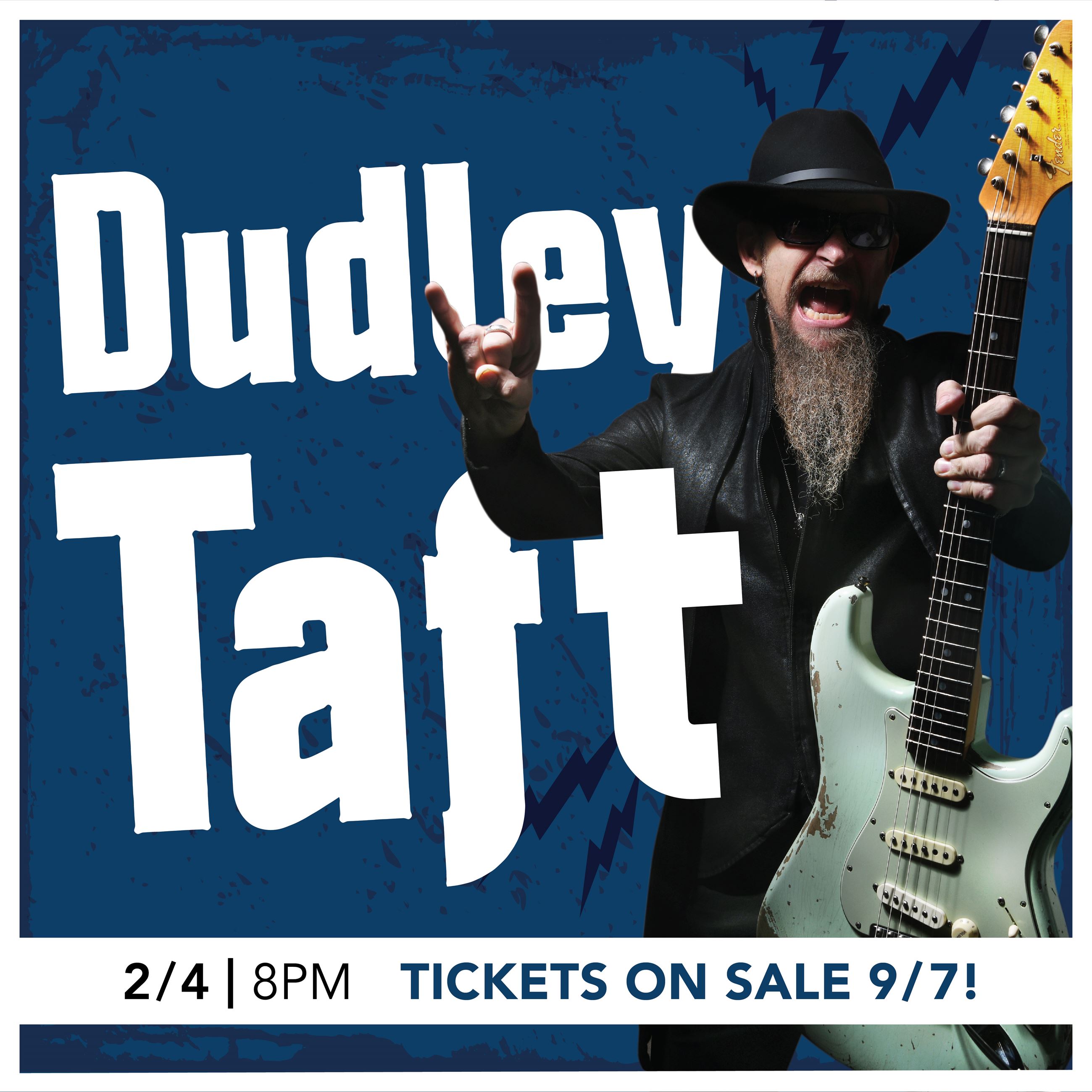 Dudley Taft grew up in the American Midwest, where he learned the values of friendship, roots blues, rock ‘n’ roll, and a good ear of corn. With a background that includes Berklee College of Music as well as years touring with rock bands Sweet Water and Second Coming, Dudley is a thinking man’s blues rocker. There’s plenty of swagger here, but also the sensitivity of a thoughtful songwriter. In is music you’ll hear delta roots mingling with Seattle grunge, a southern twang with a high-octane crunch. 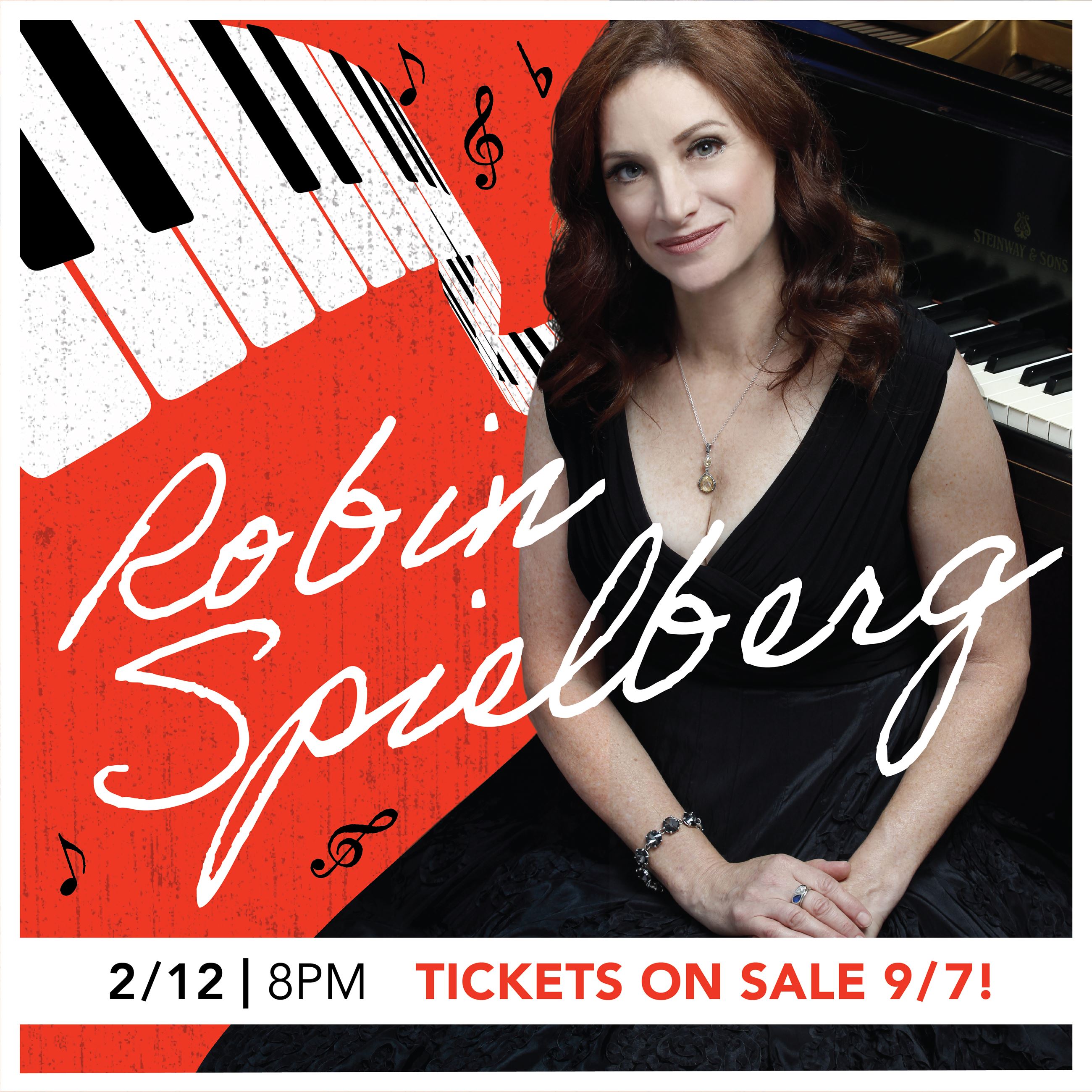 Romance is in the air! Enjoy an evening of heartwarming tales and beautiful music performed by one of America’s favorite female pianists, Robin Spielberg. Whether playing American classics from film and Broadway, or her original works inspired by love, nature and history, Robin’s neo-classical piano stylings coupled with her ability to connect with audiences always inspire and make us laugh. 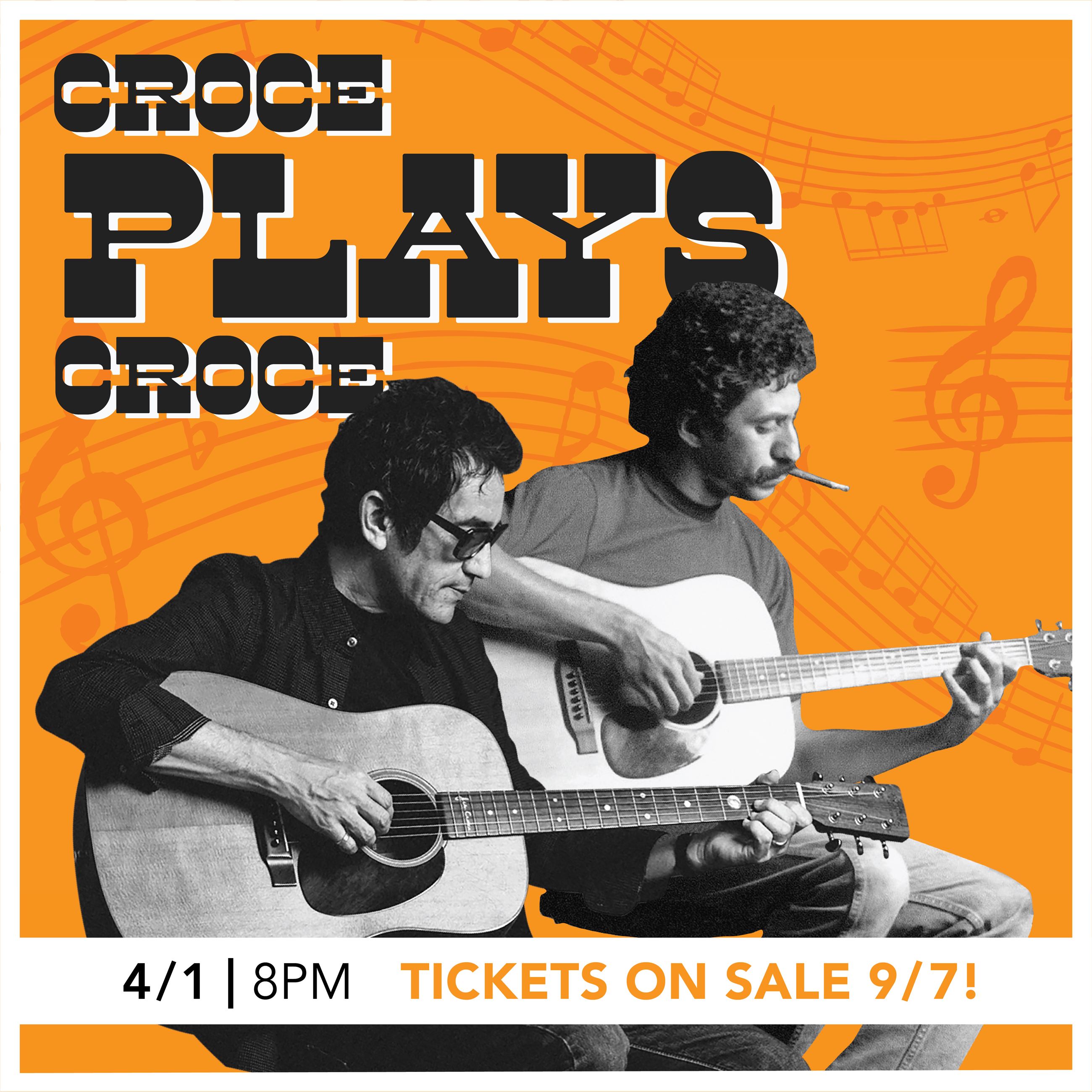 A.J. Croce is a multi-instrumentalist, roots-rock singer-songwriter, and son of the beloved artist Jim Croce. His performance features a complete set of classics by his father, some of his own tunes, and songs that influenced both him and his father. The show includes such timeless songs as Operator, You Don’t Mess Around with Jim, Workin’ At the Car Wash Blues, Rapid Roy (The Stock Car Boy), to name just a few. 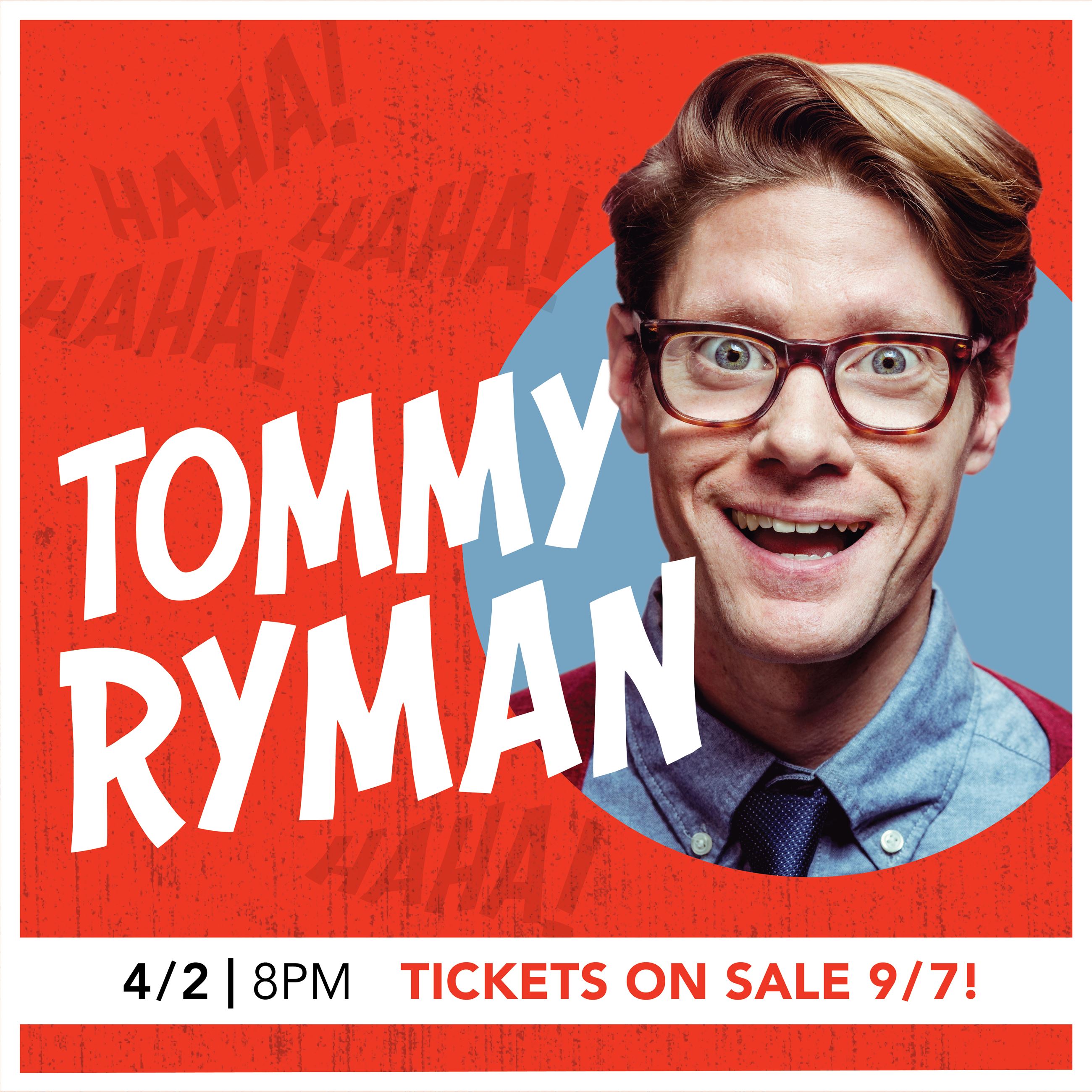 A semifinalist on NBC’s Last Comic Standing, Ryman is an oddly-adorable stand-up who landed No. 2 on iTunes comedy charts for his album Having the Time of My Life. Named Best of the Midwest at Gilda’s Laugh Fest, he performs at top clubs, colleges, and festivals across the nation including the Great American Comedy Festival. Tommy’s act can be described as absurdist and clever masked behind an endearing, innocent demeanor. A Last Comic Standing judge raved, “I have never seen anything like [Tommy] before in my whole life, [he is] one-of-a-kind, fantastic!”