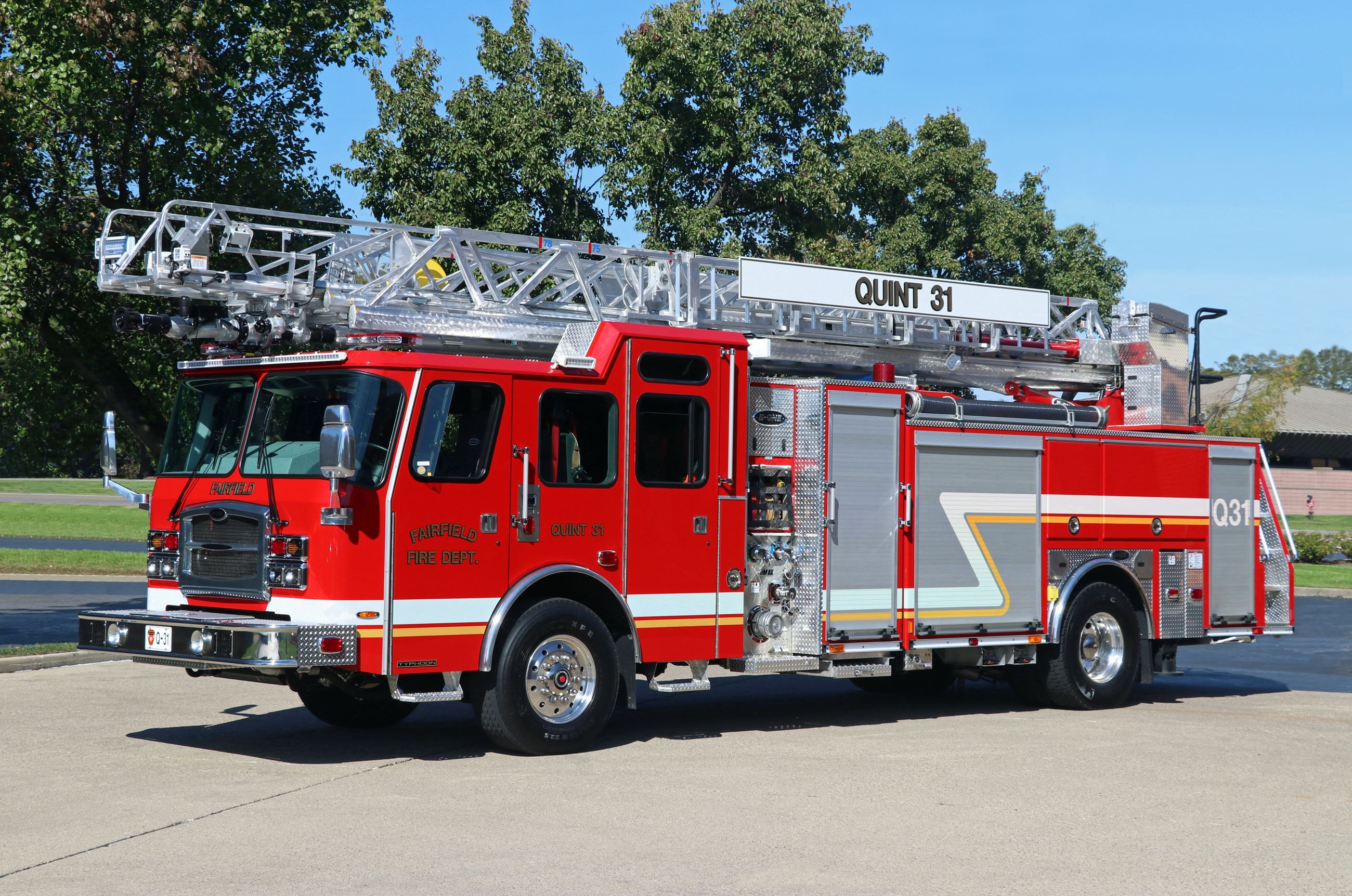 The apparatus is equipped with a 6V92 Detroit diesel with an Allison transmission. The unit has a 1,000-gallon-per-minute (GPM) pump and a pre-piped waterway with a remote control 1,000-GPM monitor at the tip of the 78' aerial.

The apparatus carries a variety of firefighting and rescue equipment, as well as 700 feet of 5-inch supply hose, 400 feet of 2.5-inch fire hose, 2 "mattydale" pre-connects and a pre-connected "trash line" located in the front bumper.

The apparatus is used primarily as a pumper and responds on all fire calls within Stations 31’s area.

The apparatus is equipped with a 60 series Detroit diesel with an Allison transmission. The unit has a 1,000-GPM pump and a pre-piped waterway with a remote control 1,000-GPM monitor at the tip of the aerial.

Like Quint 31, the apparatus carries a variety of firefighting and rescue equipment, as well as 800 feet of 5-inch hose, 400 feet of 2.5-inch fire hose, 2 "mattydale" pre-connects and a pre-connected "trash line" located in the front bumper.

The apparatus is used primarily as a pumper and responds on all fire calls within Station 32’s area. 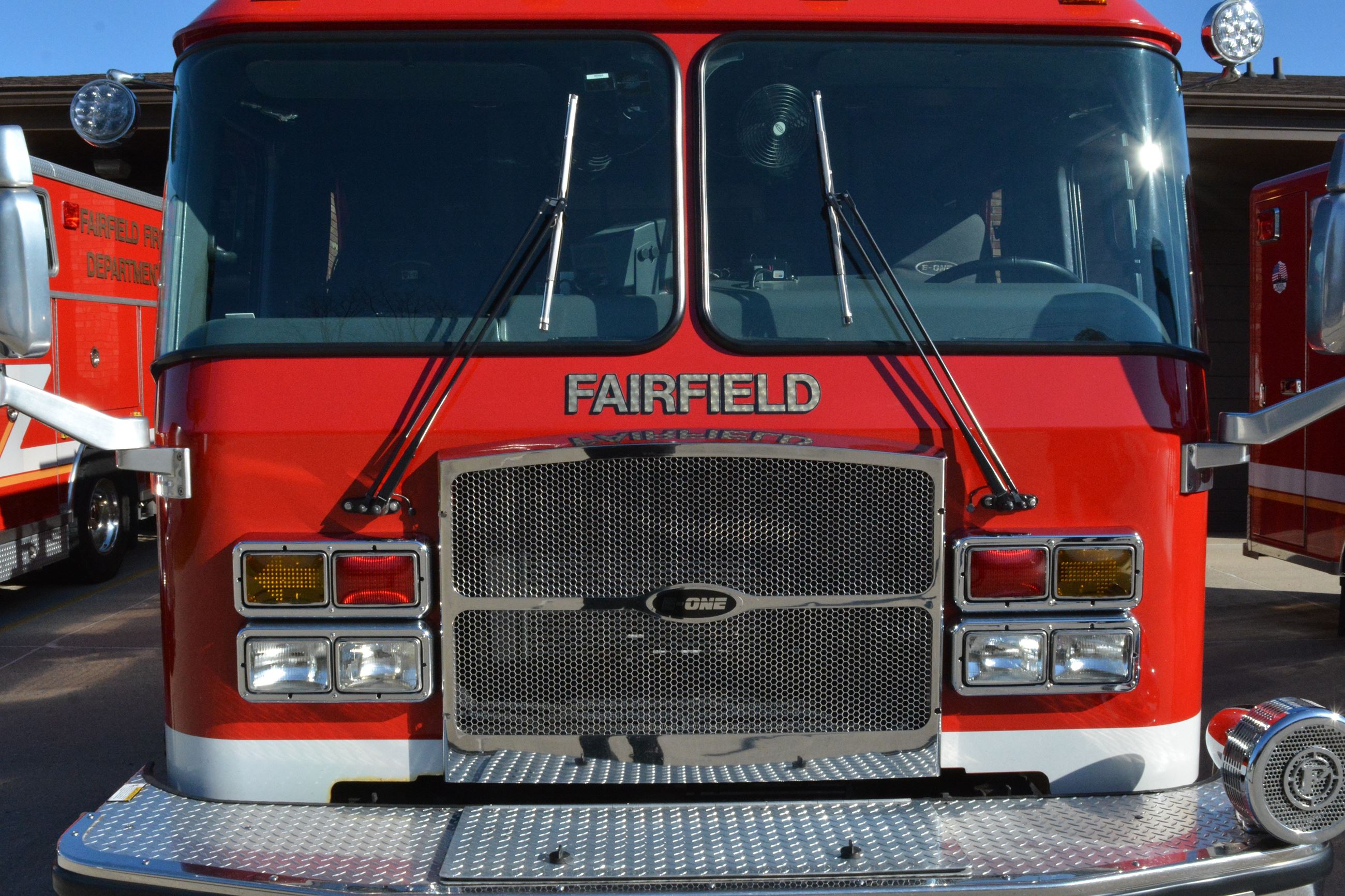 Engine 33 is a 2004 E-One Cyclone II pumper equipped with an 8V92 Detroit Diesel 60 Series with an Allison EVS-4000 transmission. The unit has a 1,500 gpm pump and a pre-piped deck gun for delivery of large volumes of water.

The apparatus responds on all fire calls within Station 33’s area. 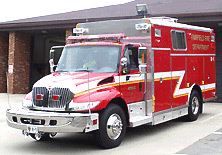 Rescue 33 is built on an International Navistar 4400 chassis.

The project, costing approximately $220,000, was completed at a savings of $84,000 to the community of Fairfield, Ohio, by the reutilization of the existing apparatus body which was constructed of stainless steel and aluminum.

The project was managed by All American Fire Equipment of Washington Courthouse, Ohio, and the work was completed by E-One in Ocala, Florida.

The original unit was built by Saulsbury Fire Equipment located in Tully, New York. The heavy rescue apparatus was constructed on a 1986 GMC Kodiak Chassis powered by a 3208TA Caterpillar diesel engine and Allison transmission. The unit was also equipped with an Eagle 18 cubic feet per minute (CFM) hydraulic breathing air compressor, Eagle fill station, and 4 6,000 pounds per squire inch (psi) D.O.T. cylinders. In addition, the unit was also equipped with a 15 kilowatt (KW) hydraulic generator.

The new rescue unit is equipped with a Bauer SCBA fill station and Haskell compressor pump and 6 6,000 psi D.O.T. cylinders. The refill capacity of the on board system has been projected to be 50+ 4,500 psi SCBA cylinders. As part of the breathing air system a 24 CFM stationary compressor and fill station was installed at Station 33 located on Winton Road. The unit is also used to refill the on board refill system.

The heavy rescue unit is also equipped with pneumatic rescue bags, hydraulic extrication equipment, and a variety of equipment used to support the various operations of the department at the scene of an emergency.

A modified Class A motor home, the Mobile Command Center serves several vital roles when responding to an emergency: 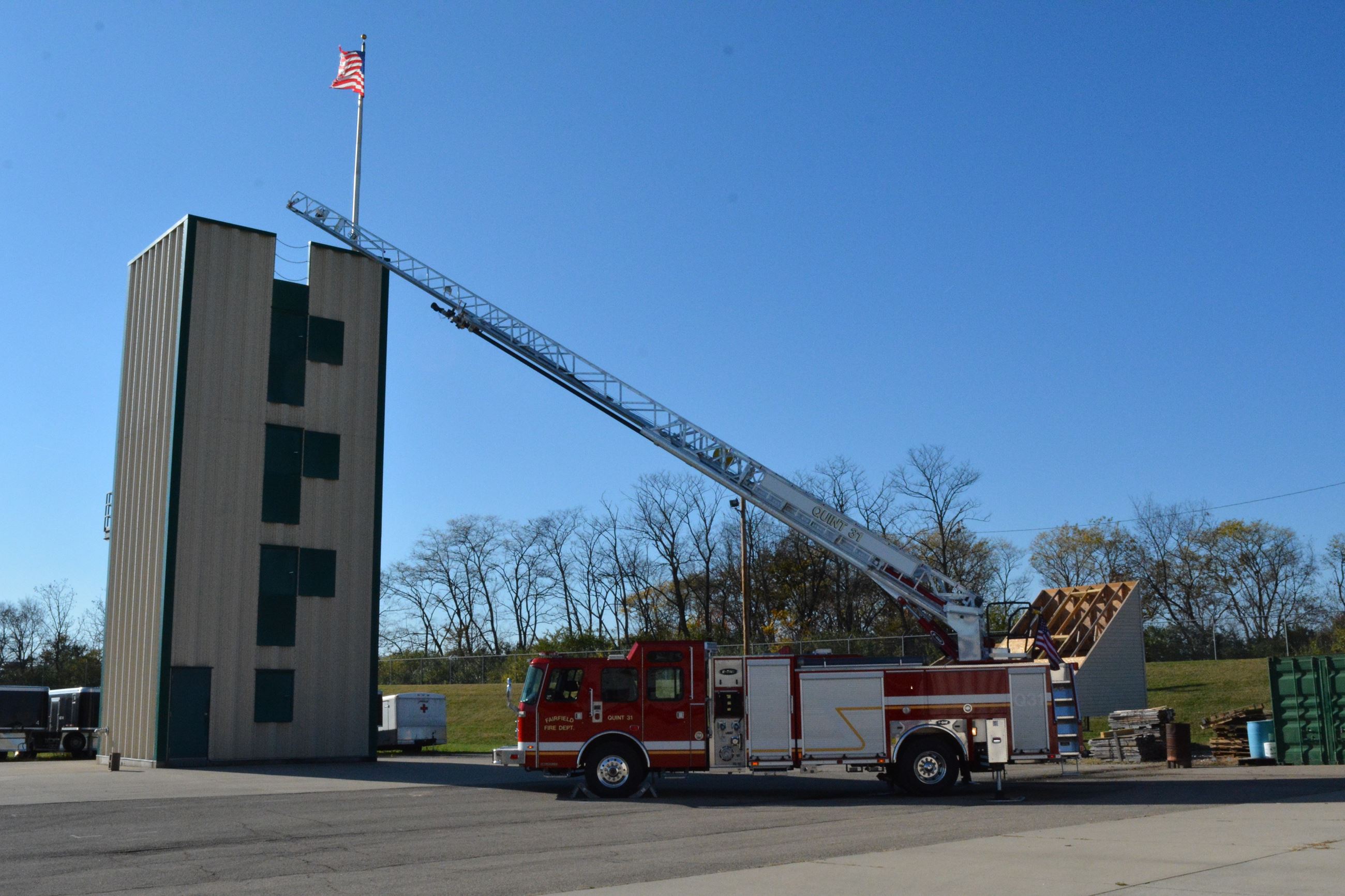 The front portion of the new unit contains bench seating, tables, a sink, microwave and refrigerator. This portion of the unit will be used to shelter and treat victims and to rehabilitate emergency personnel.

The rear portion, which can be isolated from the front via a sliding door, is designed for managing the situation. The area is equipped with three work areas, chairs and radios that will provide communication capabilities to a variety of jurisdictions. The unit is also equipped with a wireless network that can be accessed by laptop computers.

This unit will used at structure fires and to support large city events and other activities. The vehicle will also be made available, through mutual aid arrangements, to other local departments.

View an interactive graphic showing the inside of the vehicle. 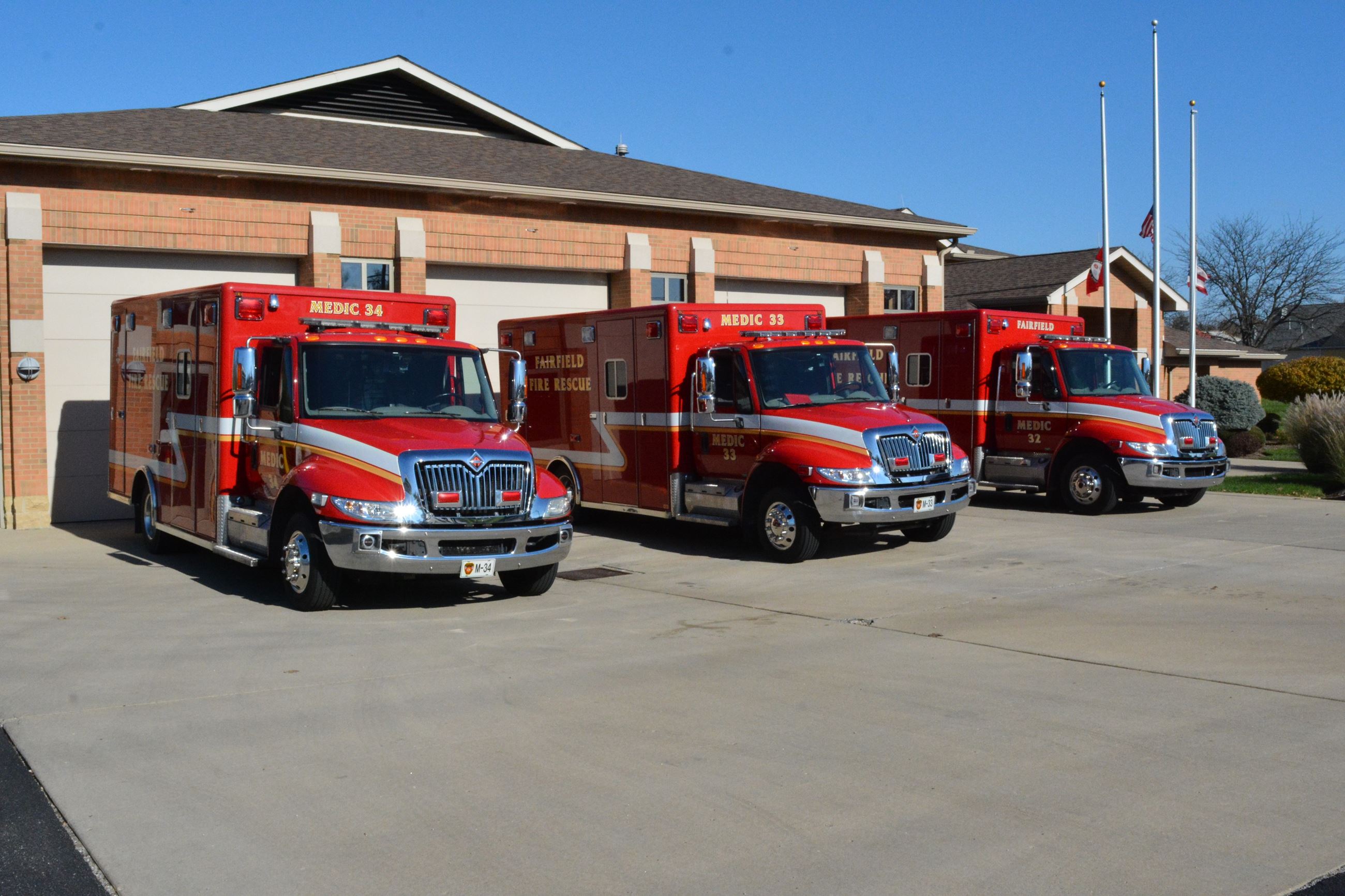 The Fairfield Fire Department responds to all medical emergencies with an Advanced Life Support (ALS) transport unit staffed by at least one paramedic and one EMT-Basic. A second paramedic responds in an ALS chase vehicle or SUV

Depending on the nature of the call, an engine or quint may also respond to assist with patient care. All primary EMS vehicles are equipped with ALS gear including a monitor/defibrillator, cardiac drugs and advanced airway equipment. Fire apparatus also carry a limited amount of medical equipment, medication and AEDs.  Fire apparatus is typically staffed with at least 1 paramedic with the remaining crew trained to the EMT-B level.

Regardless of the type of situation found, a paramedic will always be on the scene to evaluate the patient and if necessary, remain with the patient during transport to the emergency room to perform ALS care. Basic Life Support (BLS) transports are staffed by EMT-Basics. 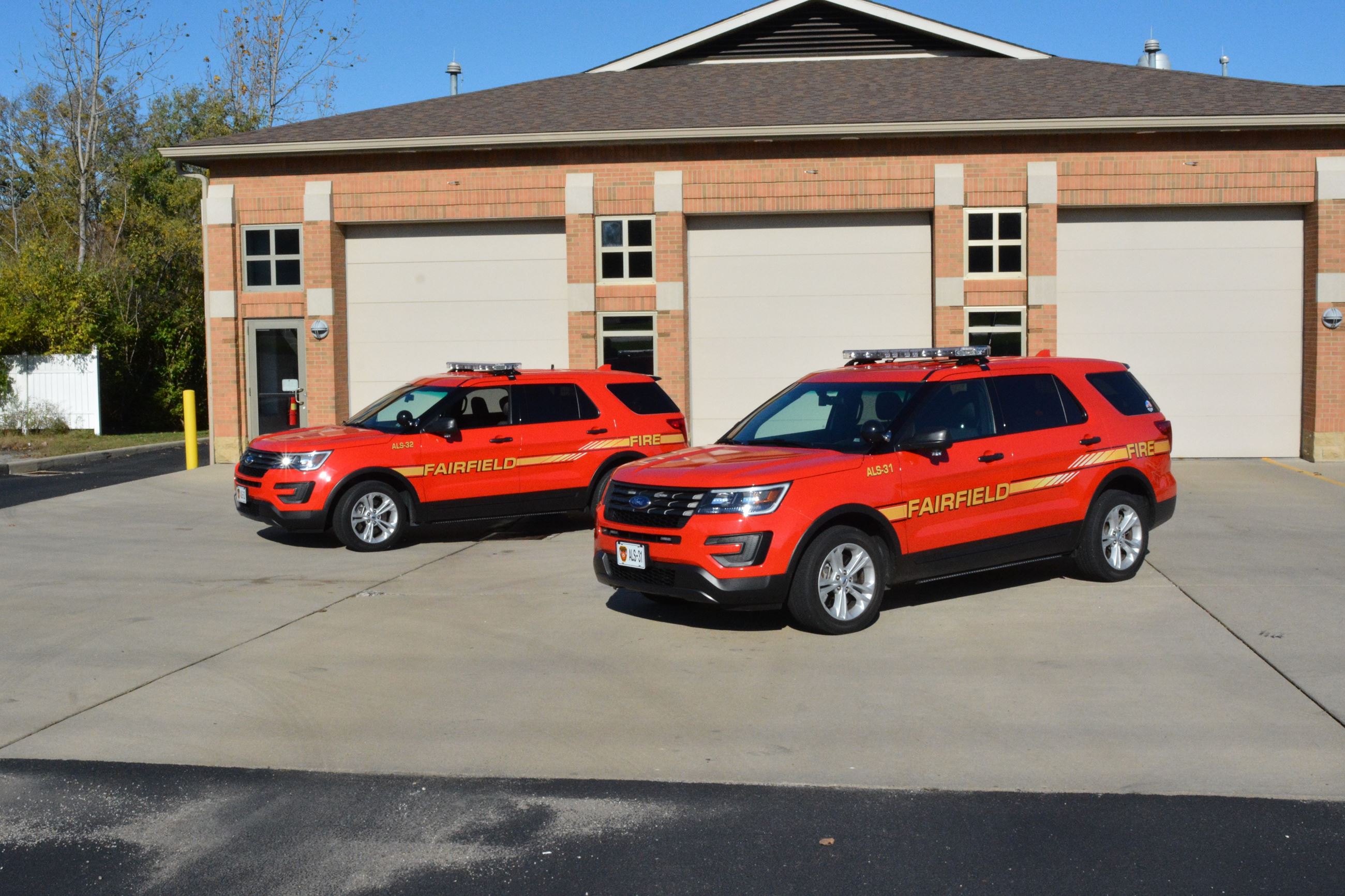